Long leaf pines & the people who love them… 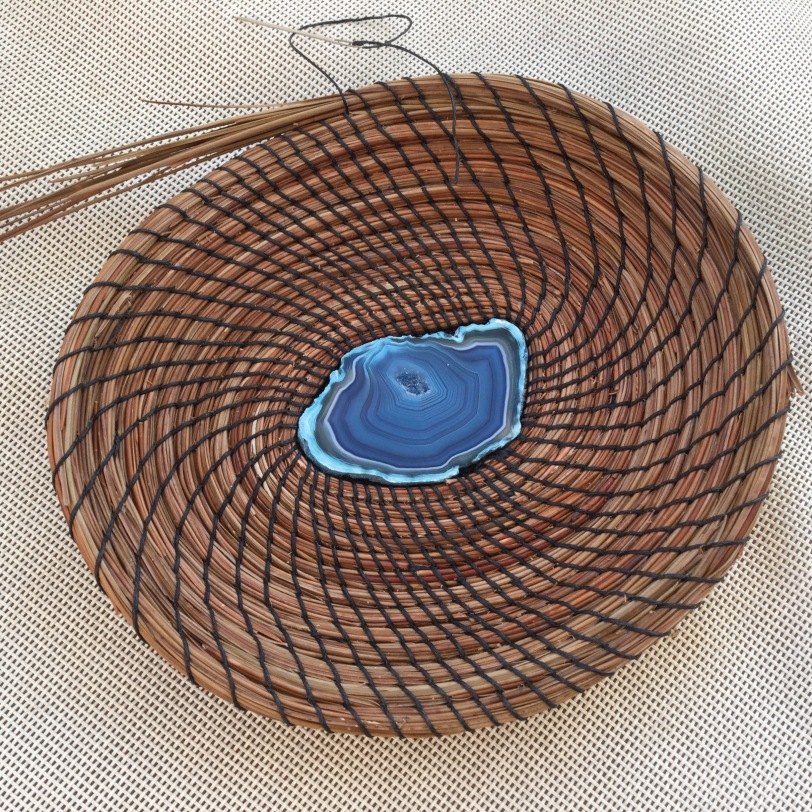 ﻿With the arrival of the Florida weather we’ve grown accustomed to the past four winters, I’m spending quiet time in our bimini-covered cockpit working on the pine needle basket I started last summer aboard Annwfn. I can’t help but think of my sister Amy as I work towards finishing this basket.

Amy was enchanted by the pine needle baskets I brought home with me that first winter. The following winter I brought needles home with me to give her, and she learned how to weave them. But she quickly took the craft to a different level. She doesn’t weave “baskets” now; she weaves vessels with portals. This past summer she was working on her “labyrinth series” and had shown her work to a couple of upscale art galleries in northern Michigan. They were interested in carrying her work. Her current project traveled with her everywhere, much like I always carry a knitting project with me. You never know when you might have a few minutes to work a few stitches, or in Amy’s case, a couple more coils. 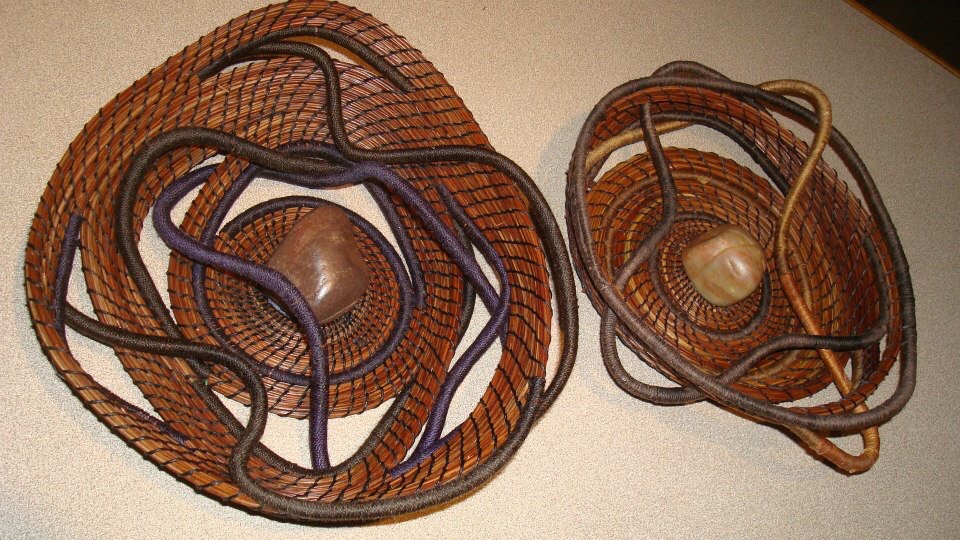 These are examples of pine needle vessels created by Amy Schneider, part of her “labyrinth series.”

And then Amy was diagnosed with pancreatic cancer. Since beginning chemotherapy last November, she hasn’t been able to handle her beloved long pine needles or create the vessels that help ground her. Cancer has robbed her of so much over these past few months, but most of all, it’s taken her from her art–an activity that sustains her, has made her feel more whole.

Last winter, before returning home, Ron and I harvested an entire paper grocery bag full of long pine needles for Amy. Although she still had a good supply, while still in the boatyard in January and out walking one day, I discovered a small tree on the roadside with longer than normal needles: 18-20″ long! Most of the needles I’ve harvested in the past are 12-14″ long.

These are VERY long pine needles!

Note how the very long pine needles are growing from the tree trunk… obviously a different type of long needle pine tree.

I cannot tell you the joy I felt when, after posting the photo of Ron with the pine needles on Facebook, Amy replied that she would order more glycerin and get ready for “cooking,” that she couldn’t wait to get her hands on them. It was such a gift to see her so excited and looking forward to the future. The chemotherapy treatments knock her down so hard.

About a week later, while taking the back road to Home Depot for more repair supplies, I noticed a very large mature long needle pine tree next to the road, at the intersection to the bike trail. I stopped the car, got out, and sure enough, I’d found another source for the very long pine needles. As this was a mature tree, I harvested many more pine needles.

This is obviously a different type of long leaf pine tree. If any of my readers know the name of this tree, please leave a comment. I’ve been trying to figure it out, with no luck so far. 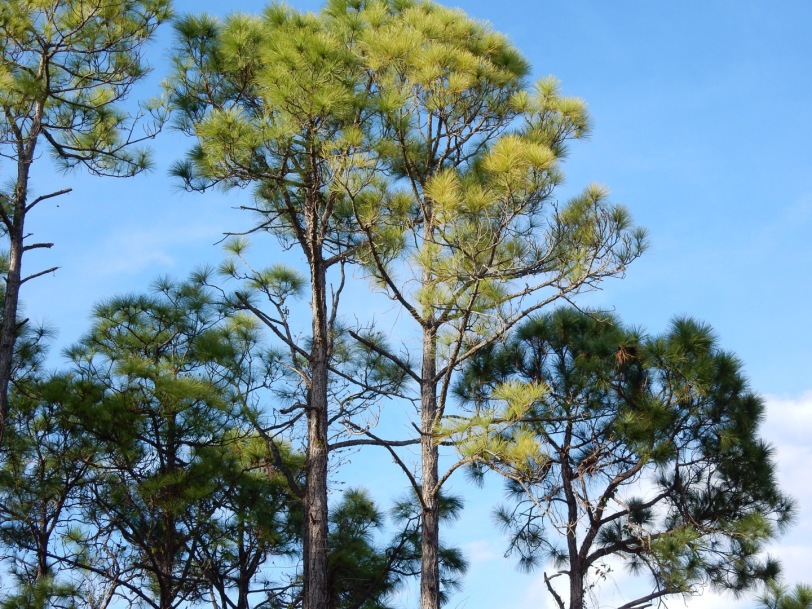 These are the long leaf pines I usually “harvest” from… before they get this tall! 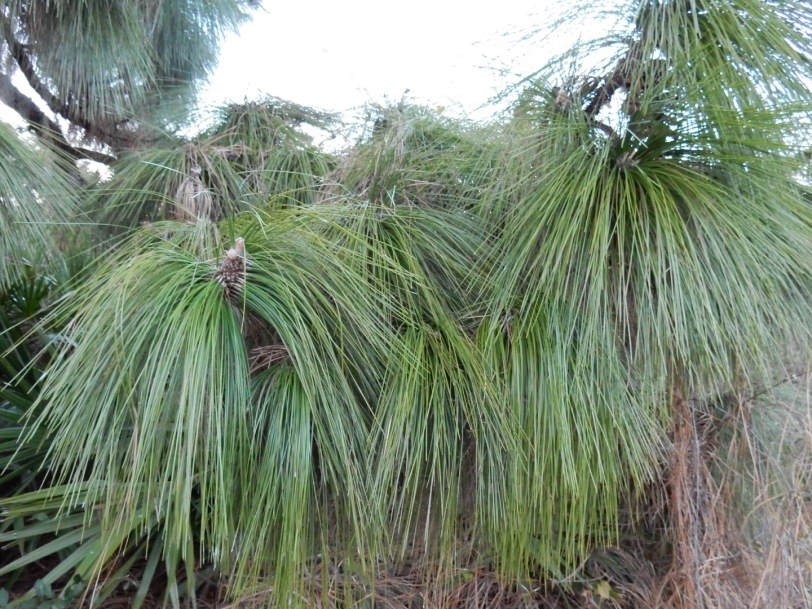 Notice how the needles droop down rather than sticking out straight in clumps.

Its pine cones are massive… 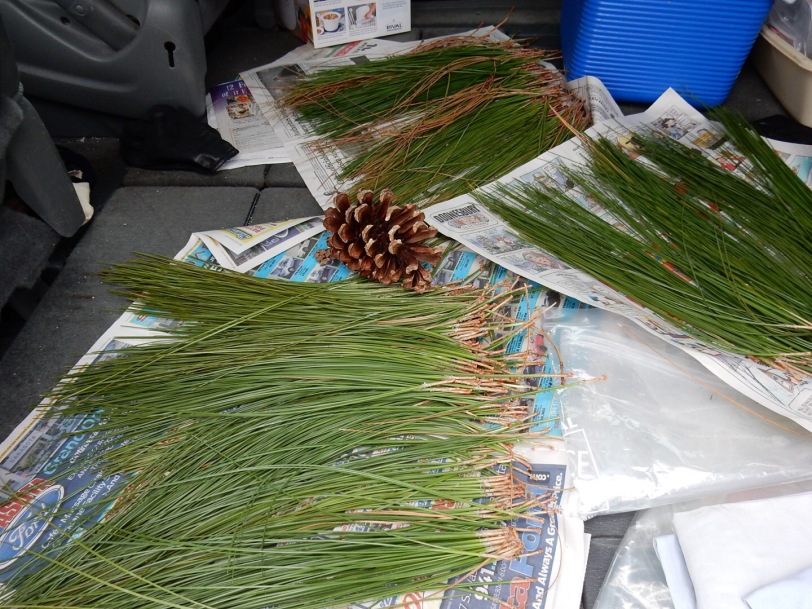 Pine needles drying on floor of our van while we cruise. They should be good and dry by the time we return to our van, in a couple of weeks.

﻿Amy’s CT scan was yesterday; she will receive her results next Wednesday morning. We are all hoping beyond hope for good news, the best news: that the six chemotherapy treatments have done what they need to do and that she can move forward with the next phase of her treatment. However, if her oncologist suggests additional sessions, my warrior sister is prepared to suit up her armor again and do more.

Hopefully soon she will again finger the needles she has so lovingly “cooked” in glycerin. She’ll bundle them in “burrito packets” for safe keeping. And then she’ll begin choosing the needles she wishes to use, she’ll “feed” her coil, waxing her linen thread as she goes, and she’ll listen to her beloved needles as they whisper to her, letting her know the design they wish to take as she holds them in her hands. The artist will create again.